In honor of Nurses Week 2021, SALMON Health and Retirement is celebrating several Residents who were formerly nurses. These Residents have shared their remarkable nursing experiences and accomplishments as well as their perception of the nursing industry today.

Barbara Hughes wanted to be a nurse ever since she was a young girl. She graduated from Saint Vincent Hospital and worked as a registered nurse in both the intensive care unit and the post-anesthesia care unit at Saint Vincent Hospital. She also held a nursing position at Good Shepherd Nursing Home in Jaffrey, New Hampshire. Barbara loves “working for people” and considers her nursing career one of her greatest accomplishments. Now, she thinks the field has improved drastically!

Anne Shilale aspired to become a nurse when she was young. She graduated from the Hahnemann Hospital School of Nursing in Worcester and spent her nursing career there and at Worcester State Hospital. Anne still enjoys helping people and often thinks about the nursing field while enjoying retirement! 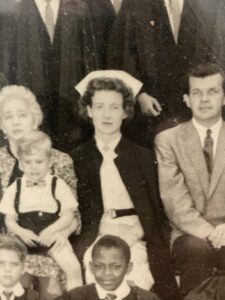 Diana Sullivan graduated from St. Thomas’ Hospital in London, England in 1952. She knew she had made the right choice to become a nurse when her best friend’s father, a retired physician suffering from palsy, complimented her bedside manner. Diana worked as a state registered nurse, registered nurse, and nurse-midwife in London, England, Toronto, Canada as well as Holden and Worcester, Massachusetts. Her favorite aspect of her job was supporting her patients and their families—introducing new fathers to their children and hearing ‘thank you’ from grateful patients. Diana is now enjoying retirement but often misses looking into the eyes of a newborn baby.

City Hospital from 1943-1945. She worked as a private duty nurse and was later proprietor of Forest Nursing Home in Worcester. Gilda “truly enjoyed taking care of others.” She is also the author of Praying for a Miracle: A Mother’s Story of Tragedy, Hope and Triumph in which she chronicles the journey of caring for her son after an accident. 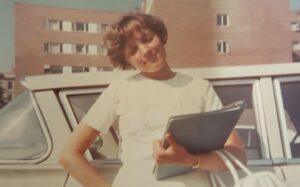 Judy Johnson worked as a nursing aid at Medway County Manor and obtained her license in 1997. She worked as an administrative assistant at the TJX Corporation during the day but found time in the evenings and weekends to care for others. Judy has always “felt at home helping those she is with.” She especially enjoyed listening to individuals’ unique stories—something she still does as a Resident in Northborough.

Mildred (Millie) Blenkhorn chose to become a nurse during a time when there was a severe shortage in the field. 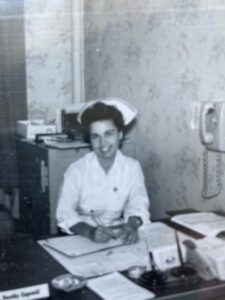 She attended nursing school at Tacoma General Hospital in Washington and was involved in the Cadet Army Corps of Nurses. Spanning 34 years total, Millie worked at Tacoma General Hospital, Deaconess Hospital, the Joslin Clinic, Hudson Hospital, and Marlborough Hospital. When asked what she liked most about her career, Millie responded with “everything.” Now, Millie likes to observe the new role that technology plays in the nursing field.