Residents of Whitney Place at Sharon, Mr. Harold Lew and Mrs. Honey Lew recently enjoyed a visit from their granddaughter, Tobi, for a special occasion—her wedding.

Mr. Lew, also formally established Cantor Lew, was asked to officiate his granddaughter’s wedding on Friday, April 9, 2021. “Only Tobi could get me out of retirement,” jokes Mr. Lew.

Mr. Lew became an official Cantor through the Jewish Theological Seminary in 1975 and served at the Temple Israel in Sharon for 36 years, working alongside four different Rabbis during his time there. Mr. Lew adds, “I loved it; I would’ve kept going, but I knew it was time to retire with my wife.” While he was a Cantor, he officiated approximately 250-300 weddings, including those of many family members. Mr. Lew’s involvement in the town of Sharon is extensive—he belonged to many different organizations, including serving as Chairman for the Sharon Housing Authority during the construction of the Hixson Farm Housing for the Elderly. 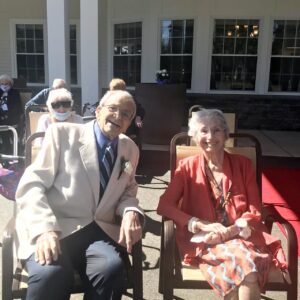 Tobi’s wedding isn’t the only significant family love story. Growing up in Dorchester, Mr. and Mrs. Lew met in 1940 when they both entered Hebrew Teachers College. Three years later, Mr. Lew turned eighteen and enlisted in the United States Navy. He attended boot camp in Newport, Rhode Island and was assigned to the USS Hancock, a large aircraft carrier that was sent abroad to the Pacific for two years. Following his service, Mr. and Mrs. Lew married on June 15, 1947; Mr. Lew describes marrying his wife as, “The best move I’ve ever made in my life.”

“Tobi’s wedding was beautiful,” says Mrs. Lew. The Lews were both overjoyed that their granddaughter officially married right on the Whitney Place at Sharon campus on a perfect spring day. About 25 Residents also attended the wedding, and the couple cheerfully exclaims, “Everyone loved it!”

The Lew’s granddaughter plans to have a larger celebration next year.

Mr. and Mrs. Lew have been Residents of Whitney Place at Sharon since 2017, describing their residency as wonderful and more specifically, “As good as it gets!”

Engagement Director Allison Karsay describes the wedding as “a wonderful time of community and family; staff and Residents were able to bond and celebrate something so positive together. We were very happy to be able to do this for Tobi!”

When asked if he was nervous to come out of retirement and officiate his granddaughter’s wedding, Mr. Lew says, “Of course not! I’d do it all again.”