The Willows at Worcester Chef Named Best in Central MA 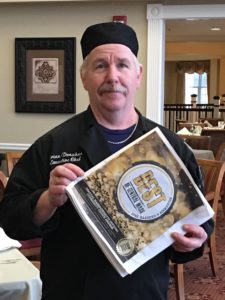 The Willows at Worcester’s Executive Chef Brian Donahue is the best chef in central Massachusetts according to locals.

Brian was announced as “Best Chef” at the Telegram & Gazette’s Best of Central Mass Gala, where local businesses and individuals in a variety of categories won awards based on votes from the newspaper’s readers.

Brian has been pioneering the dining team at the Willows at Worcester for three years, continually providing an exquisite dining experience for Willows residents and guests at Cascades, the community’s fine dining restaurant.

When Brian first learned he won, he said he was “surprised and overwhelmed … it’s a great honor.”

He added, “the people I prepare dishes for every day and know me must have believed in me and truly enjoy the cuisine.”

While he is proud of the honor, he said his team deserves much of the credit for the achievement.

“No chef is good by himself,” he said. “It’s really my team that won this award.

“Every meal we prepare, we try to hit a home run,” he added, “because if the residents are happy, we’re happy.”

10 Activities for Seniors During the Summer