Tuba music emerged from the silence of a cloudy afternoon at Whitney Place at Sharon on October 5, 2021. The melody  marked the beginning of their Oktoberfest event, which celebrated Whitney Place at Sharon’s four-year anniversary since first opening its doors in 2017. The community is conveniently located just over the Sharon and Foxborough town line near Route 95 and Shaw’s Plaza, and offers a mix of studio, companion, one-bedroom, and two-bedroom apartments. The 88 total apartments in the community are a combination of traditional assisted living and memory care units.

Nearly 80 attendees packed into the parking lot – a crowd comprised of Whitney Place Staff, Residents, Resident families and friends, as well as local Sharon families and community members. Executive Director, Brian Patterson, explains that the local support, in addition to the encouragement from Residents and their loved ones, is what makes the Whitney Place at Sharon community so unique. 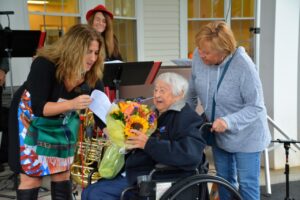 Guests were greeted by decorative corn stalks, a traditional German oompah band playing giant horns, and painted pumpkin centerpieces. These were no ordinary pumpkin center pieces purchased from a general store -they were painted by the Residents of Whitney Place at Sharon.

Community Outreach Director, Allison Karsay described how important Resident involvement is when preparing for these types of events. “Residents are excited to welcome visitors into their home,” says Karsay. “Like anyone else, they want to help prepare and decorate their home to welcome their guests. It helps build the excitement and encourages their continued independence. It strengthens the sense of community. It really is a team effort.” This type of engagement is commonplace in Whitney Place at Sharon, with staff reporting some of the highest engagement numbers across SALMON’s continuum. 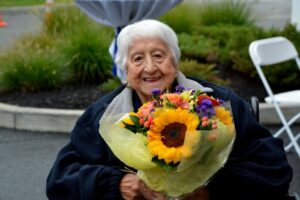 Even Whitney Place at Sharon’s very first Resident, Margaret O’Brien, was honored with flowers as her family members looked on. Among the crowd, a German Resident was joined by eight of their family members, basking in the celebration of culture and community.

Matt Salmon, CEO joined the celebration and addressed attendees, citing his pride in the Sharon community and his optimism toward the future. Together, everyone mingled, enjoying delicious German cuisine, drink, and dancing as the tubas played – a successful celebration to mark the opening anniversary of a very special community.

To learn more about how you can become part of the Whitney Place at Sharon community, contact us here!