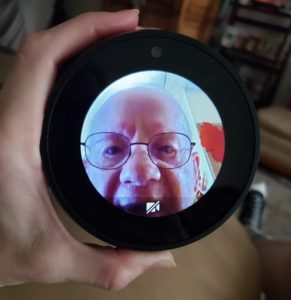 A Beaumont resident and his daughter are adding ease and depth to their long-distance connection through the use of modern technology devices.

Henry Dion of Beaumont Rehabilitation and Skilled Nursing Center at Northbridge and his daughter Sue Dion, who lives in Beverly Hills, CA, have been participating in voice and video calls with an Echo Spot, an Amazon smart device she bought for his room on Father’s Day.

Sue said she was inspired to try the device when she saw commercials around holidays demonstrating how you can connect with family through Amazon Echo products. She first purchased a Spot for herself, then tested the waters with her father by describing it to him and allowing him to hear her use it while on the phone together.

Sue urged her father to get one as well, saying, “I miss you and I want to see your face, will you do this for me?”

At first he was reluctant, but he was sold once he learned he would be able to see Sue’s cat, she joked.

Now, if Henry wants to talk to his daughter, he can simply say “Computer, call Sue,” and the Spot connects them.

In addition to having voice and video calls with Sue, Henry has also used the Spot to check the time, the weather and Red Sox scores.

Sue said she can also direct her Spot to “drop in” on her dad, which automatically connects the two systems’ cameras.

“I can turn the camera on just like I’m sticking my head in his room,” she said.

Sue said, so far, the new use of technology has been very successful. She was shocked when one evening, Henry called her for the first time in ten years. (Sue reports she calls her father every day, but he has never been one for using the phone.)

“This is a man who doesn’t like to use the landline because it’s too technical for him,” she said. “If my father can handle using a Spot, anyone can.”

Because the device is activated solely through voice command, Sue said it can really optimize communication between people with eyesight, hearing or mobility issues and their family members.

“I hope a lot more seniors and their families start to use these devices,” she said “because not everyone gets daily visits, calls or care packages.”

Sue also plans to implement smart plugs in Henry’s Beaumont room so he can use voice commands to turn devices, such as lamps, on and off.

As always, Sue said, the staff has been extremely helpful assisting Henry with the Spot setup.

Known as “King Henry” in his Beaumont home, Sue’s dad frequents recreational activities and events with his neighbors and genuinely enjoys his life at the community, according to Sue, who said she is thankful the Spot can better show her his happiness and growth.

“He’s doing so well,” she said, “and I knew he would do well, but I didn’t know he would thrive there and live better than he ever has before, and I have the Beaumont staff to thank for that.”